The Postage Stamps of Basutoland (Part One)

Basutoland received its first distinctive stamps in 1933, a series engraved and recess printed by Waterlow and Sons, being released on December 1. The stamps, in denominations of ½ d., 1d., 2d., 3d., 4d., 6d., 1/-, 2/6, 5/- and 10/-, were in a uniform design and depicted a crocodile (the national emblem), with the lofty Drakensberg Mountains in the background. A profile of George V was inset at the top of the design. 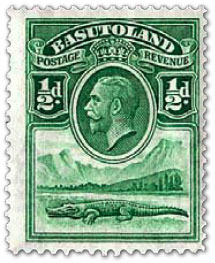 The following year four denominations, ½ d., 1d., 2d. and 6d. were produced  stamp with the overprint OFFICIAL for use by Government Departments. The use of these stamps was short-lived and very strictly controlled. It has been stated that only 23 of the ½ d., 34of the 1d., 54 of the 2d. and 26 of the 6d.were used and all of the Basutoland Officials in postally used condition are scarce items. They were never released to the public in mint condition and are now in private hands. The 6d. is considered one of the twentieth century rarities of the Commonwealth.

Basutoland participated in the two pr-war colonial omnibus issues, releasing a set of four in May, 1935, to celebrate the Silver Jubilee of King George V and a series of three stamps in May, 1937, in honour of the Coronation of King George VI.

Waterlow and sons produced a new definitive series with the three-quarter face portrait of King George VI substituted for the profile of his father. This series, in the same denominations and colours as the preceding issue, was released on April 1, 1938. A 1½ d. stamp was added to the range of values available. 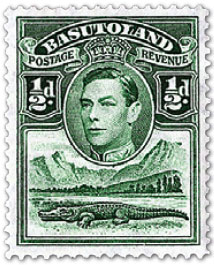 Along with the other High Commission territories in Southern Africa, Basutoland departed from the usual colonial omnibus design for the Victory series of 1945. Instead the Victory stamps of the Union of South Africa were released with a suitable overprint. These stamps were printed by photogravure in two colours by the Union 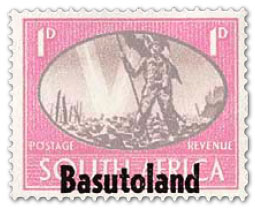 Government printer, Pretoria. The basic stamps were inscribed alternately in English and Afrikaans and are therefore collected in bilingual pairs. The 1d. showed the symbol of Victory, the 2d. depicted a ploughman with a typical African mountain scene in he background, symbolising Peace, while the 3d. showed a man and a woman gazing up at a star, symbolising Hope.

With Bechuanaland and Swaziland, Basutoland issued four stamps in February 1947, to mark the visit of the Royal Family to southern Africa. The 1d. bore a portrait of the King in the uniform of the Admiral of the Fleet, the 2d. featured the King and Queen Elizabeth (the late Queen Mother) side by side, the 3d. showed Princess Elizabeth and Princess Margaret, while the 1/- depicted the entire Royal Family. The stamps were recess-printed by Waterlows on Multiple Script CA paper. 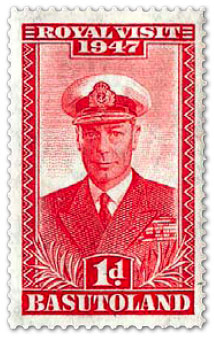 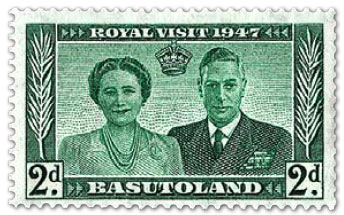 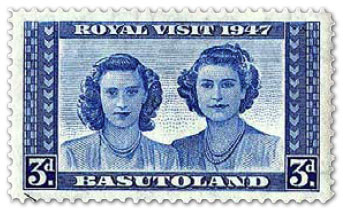 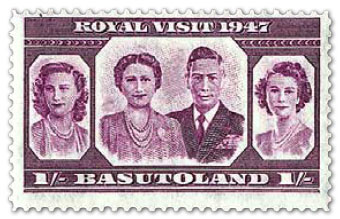