From the Fire of 1902 Came the Ecuador Fire Control Marks

On July 16 & 17, 1902 an extensive fire swept thru Quayaquil, Ecuador. The ruins of  Guayaquil are shown a 1903 Post Card. After the fire it was discovered that a large quantity of mint postage and revenue stamps had been stolen. To prevent use of these stolen stamps the Government ordered Provincial authorities to hand stamp all their remaining stamps with Control Marks. 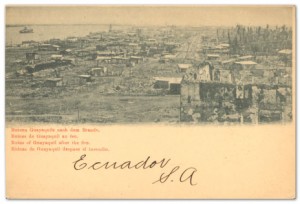 Ruins of Guayaquil after the 1902 Fire

Each Province designed their own different hand stamp and applied them in different colors. The stamps that were overprinted were the 1899 Issue (#137 thru #144) and the 1901 Issue (#145 thru #152).  Also overprinted were the 1901-1902 issue of Revenue Stamps (O124 thru #O131).  Both Juhani V. Olamo in “The Revenue Stamps of Ecuador” & Vicenio Fernandez in “Sin Valor Postal” (1992) state that there is no legal basis on which the 1902 Fire Control Marks could appear on the 1899-1900 stamp issues since they were retired on Sept. 20, 1901, before the fire. Leo John Harris in an article in the “Postal History Journal” (June 1962) states that ‘percentage-wise only  a very few of the 1899 issue stamps received the control marks since it may be reasoned that by the summer of 1902, the stock of these stamps was nearing exhaustion’. Olamo states that some of the control marks are forgeries done by Francois Fourier.  These forgeries will be noted as they occur throughout this article.   The fire control marks can also be confused with the ‘Escolares’ surcharges on the Ecuador issues of  1905-1906 and 1907-1908.

For each province I will show a stamp with the Control Mark on it and then a line drawing of each Control Mark. 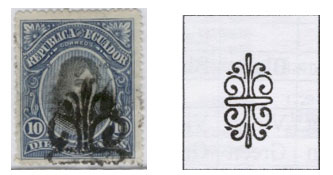 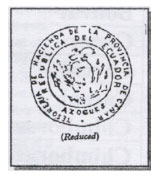 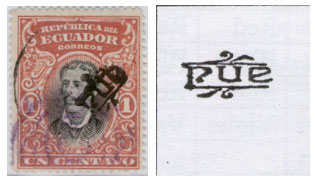 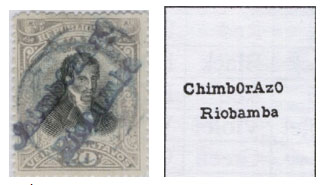 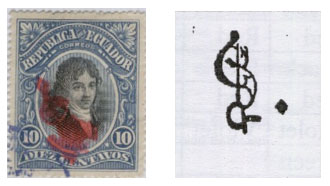 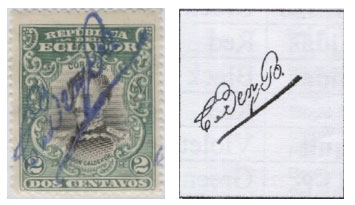 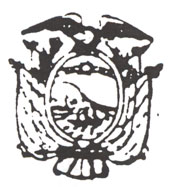 Guayas Province – The Control Mark (Scott 146/1901) is the rubric ‘CBenjRo’ of Guayas Governor Carlos Benjamin Rosales and is the easiest Control Mark to find. It can be found in Violet, Blue & Black on all the 1901 issues, although Olamo lists it only in blue and purplish black. I know from experience that it is nearly impossible to distinguish between blue & black, since many of the colors have faded. Both Harris & Fernandez list the 1899 issues in black, and Olamo states that all the Guayas Province issues are Fournier forgeries. I have this Control Mark on Revenues #O125 thru #O130.

Imbabura Province – This Control Mark which I have never seen on a stamp is listed by Olama & Fernandez. Olama lists it on Scott #146 & #148 in either Blue, Green or Violet. Fernandez lists it only on Revenue Stamps in Greenish-Blue or Violet.