Why not collect Tajikistan?

It is doubtful if the stamps of the Central Asian state of Tajikistan have attracted the attention of world­ wide collectors to any greater degree. It is an ancient country located just north of Afghanistan. The Tajik currency unit is the somoni which derives its name from Ismail Somoni (849-907) who is considered to be the founding father of the Tajik nation. From a linguistic point of view, the Tajik language is very similar to Persian.

Historically the cities of Bukhara and Samarkand have been the main centres of Tajik cultural and spiritual life. Today these cities are located in the neighbouring republic of Uzbekistan.

There are quite a few Tajik stamp issues featuring personalities from the country’s glorious past. Fig 1 shows Ali Hamadani (1314-1385), a famous poet and Muslim theologian who is buried at Khatlan in Tajikistan. 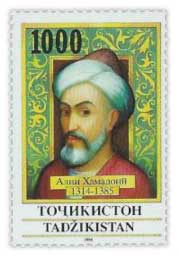 Tajikistan is very much a mountainous country with the highest peak reaching 7.495 metres. The climate is distinctly continental with very hot  summers and cold winters. Typical mountain scenery is depicted on Fig 2. 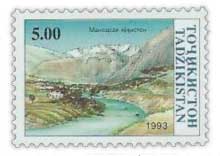 When the Soviet Union began taking an interest in the Central Asian region the Tajiks rejected the Russian advances. It was only in 1929 that the Tajik Soviet Republic was created. The area had previously been included in Uzbekistan. It was Soviet leader Stalin who decided to let parts of the Tajik territories remain in Uzbekistan as some sort of punishment.

Russians and Uzbeks were encouraged to settle in Tajikistan. Today the country has a population of some 8.7 million people with the majority being Tajiks but there is also a 25 percent minority of Uzbeks. From a religious point of view Islam is the dominat­ing religion in the country. Fig 3 shows the impres­sive Sheikh Muslihiddin Mosque in Chudzjand, the country’s second largest city. 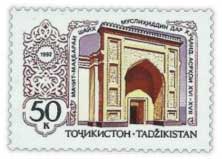 Many of the old ethnic and political conflicts resurfaced when Tajikistan became an independent republic in 1991 following the collapse of the Soviet Union. The following year a civil war broke out. It lasted until 1997 and claimed an estimated 50,000 lives.

During the Soviet era Tajikistan was the republic with the lowest standard of living in the entire union. The long civil war in the 1990s certainly didn’t help to improve the situation. Agriculture remains the main economic activity and the industrial sector is still poorly developed. Tajikistan has a very large foreign debt which of course hinders  economic develop­ment. Fig 4 shows the Tajik national flag superim­posed on a map of the country. A traditional Tajik art pattern is depicted on Fig 5. 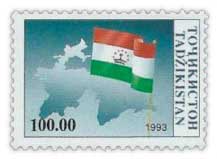 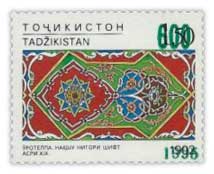 Tajikistan is the preferred country of transit for the huge quantities of drugs which are smuggled from Afghanistan to the Russian Federation. Presumably the extensive corruption helps facilitate this illegal trade. Transparency International lists Tajikistan as number 151 in its listing of perceived corruptive practices in the countries of the world. At number 175, the bottom position, we find Somalia. The Nordic nations occupy the top positions in this ranking which tells a lot about civil rights, religious freedom and other rights that the vast majority of the readers of this magazine take for granted and which to a large degree are not available for the people of Tajikistan. Sadly corruption on all levels is present in most of the former Central Asian Soviet republics.

It was in 1991 that Tajikistan joined the ranks of stamp-issuing nations after having previously used Russian or Soviet postage stamps. In the early years of postal independence a number of Soviet definitive stamps were overprinted and surcharged with new values to be used as Tajik postage stamps. One example is shown in Fig 6. 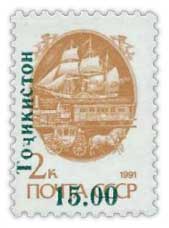 The capital city of Tajikistan is Dushanbe where there is a philatelic bureau operated by the Tajik Postal Service. Since the country achieved inde­pendence in 1991 it has released more than 1.200 stamps and 40 souvenir sheets which 1suppose is quite reasonable for a period of more than a quarter century.

Leafing through my catalogue I notice many issues featuring the country, its history, its cultural heritage, its famous sons and daughters and the usual output of popular thematic stamps. Shown in Fig 7 is a  snow leopard. Fortunately most issues are inexpen­sive but I imagine it can be difficult to locate them. 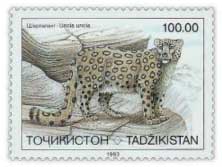 Sadly Tajikistan has also been the target for those people who produce illegal stamps, i.e. stamps which look like real Tajik issues but which have not been released by the country‘s postal service. These illegal stamps are generally printed in small sheet format (frequently 4, 6 or nine stamps in each sheet) featuring the most popular stamp topics of the day.

[Published by kind permission of the Editor of Stamp News Australasia.]