The Principality of Bulgaria and its Stamps

On 1st January 2007 Bulgaria became a member of the European Union. The road to full membership has been far from easy. The country’s economy could have been in a better shape and corruption at all levels in society is still a major problem. Hopefully, being a member of the EU will lead to progress and development in the country. 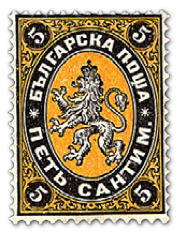 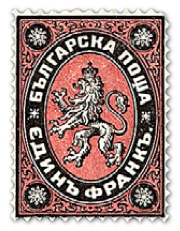 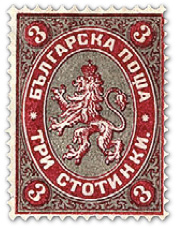 After World War II Bulgaria became one of states of the socialist bloc under the leadership of the Soviet Union. This meant that contacts with Western Europe and the rest of the world were far more limited than what many Bulgarians would have wished. As in the other socialist countries there was a constant lack of certain goods in the shops.

Some time in the 1960’s I somehow began an exchange with a Bulgarian collector. But he did not want stamps but rather razor blades in exchange! We carried out a number of exchanges and I soon had a sizable collection of Bulgarian cancelled-to-order issues of the 1950’s and 60’s.

Bulgaria has never been a very popular country in philatelic circles. But it is a country which has a lot to offer us collectors and in this article I intend to spotlight what is undoubtedly the most interesting period in Bulgaria’s philatelic history.

Way back in the 15th century the territory of present day Bulgaria was incorporated into the Ottoman Empire and it was to remain like this until 1877. In the 19th century many Bulgarians began dreaming of having an independent nation. They were supported by the Russians and the other Slav peoples in the region.

The Turks suppressed all attempts at rebellion with a considerable degree of violence leaving thousands of Bulgarians dead. This led Russia to declaring war on the Ottoman Empire on 24th April 1877. After a short war with thousands of casualties on both sides Russia eventually ended the war victoriously and a Greater Bulgaria under Russian protection was established. Some time after the end of the Russo-Ottoman war a peace conference returned East Roumelia (South Bulgaria) to the Ottoman Empire. From 1877 until 1878, Bulgaria was administered by Russia.

In Bulgaria a council of notables was set up to work out a constitution for the country. It ended its work in April 1879 and Bulgaria was now a principality. The German prince Alexander von Battenberg was elected as Bulgaria’s first regent. He was a relative of the Russian tsar so the choice of regent was welcomed in Moscow.

In May that same year the Bulgarian postal service was established. The situation in the country was still very unclear and the first stamps had denominations in French francs and centimes. One year later the province of East Roumelia had its first stamps. This Ottoman province used stamps of its own until it was reunited with the motherland in 1886.

Prince Alexander supported the conservative forces in the country and wanted to build Bulgaria into a big and powerful nation. He was instrumental in liberating East Roumelia or South Bulgaria from Turkish rule.

However, Prince Alexander was removed from power by a military coup d’état in 1886 and sent into exile to Russia. In 1887 yet another German prince wus elected to rule Bulgaria. He was Ferdinand von Sachsen-Coburg-Gotha. During his leadership Bulgaria developed into a modern state breaking all ties with the Ottoman Empire in 1908 when the country became a kingdom with Ferdinand I as its first tsar or king. This also marks the end of Bulgaria’s classic philatelic period.

As already stated Bulgaria released its very first stamps on 1st May 1879. The stamps show a crowned lion, Bulgaria’s national symbol. The same design in slightly differing varieties was then used for most of the country’s 19th century stamps.

Bulgaria’s premier issue was printed in St. Petersburg, Russia. The 10-centime and 1-franc values had the lowest printings of only 100,000 copies each. Half a million 25-centime stamps were printed. This was the rate for ordinary letters and obviously the most needed value. If you look closely at the stamps you will discover strong similarities with contemporary Russian stamps. 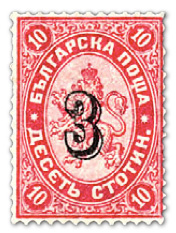 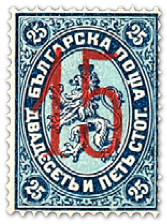 As a security measure the stamps had a watermark. It was quite large and is composed of wavy lines and the letters EZGV in Cyrillic script. A block of several stamps is needed to get the complete watermark.

The Bulgarian currency was the lev which is divided into 100 stotinki. In 1881, Bulgaria issued six new stamps with denominations in stotinki. As with the previous issue, the 1881 stamps were also printed in two colours. The 5 stotinki stamp exists with inverted background and this is one of the major rarities in Bulgarian philately.

Additional stamps in the same design were released in December 1882. Once again there was an inverted background error but this time it was the 3 stotinki stamp. Also the 5 stotinki exists printed in the wrong colour. These two errors are great rarities.

Even after the introduction of stamps with denominations in the national currency the Bulgarians continued using the stamps with French currency until they were completely exhausted. This was especially true for the 1-franc stamp which was used instead of a non-existent one-lev denomination.

During the years 1884 and 1885 there were a number of provisional surcharges some of which are quite scarce. Unfortunately there are clever forgeries in the marketplace.

In 1901 the Bulgarians apparently wanted something different and a new set of definitives depicting Prince Ferdinand was issued with denominations ranging from 1 stotinka to 3 leva obviously supplying all postal rate needs. 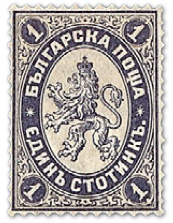 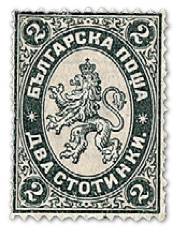 During Bulgaria’s classic philatelic period there were also four commemorative issues. In connection with the baptism of Prince Boris there was a set of four stamps depicting Bulgaria’s coat of arms. In 1901 there were two commemorative stamps marking the 25th anniversary of the insurrection against the Ottoman Empire. As far as I know they are the only items in philately that depict a cherry wood cannon! The 1877 battle at Shipka Pass was commemorated with three large-sized stamps in 1902. The catalogues tell us that these two sets have been forged despite their low valuations. However, they don’t tell us how to distinguish between genuine and forged stamps. Finally three stamps were issued in 1907 marking the 20th anniversary of the king’s accession to the throne of Bulgaria. The stamps show a young version of Ferdinand in 1887 and that of an elderly gentleman in 1907.

For the sake of accuracy we need to add some 20 postage due stamps during Bulgaria’s period as a principality. All in all there were some 100 different stamps from 1879 until 1908 which makes this quite a handy collecting speciality. Fortunately most of the stamps are affordable although there are some exceptions as outlined above. At auction it should still be possible to pick up collections of 19th century Bulgarian stamps at a reasonable price. 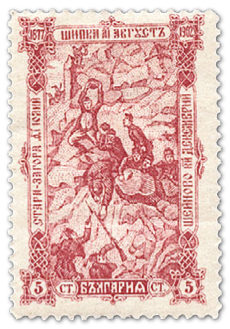 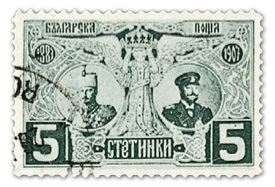 Readers wanting to find out more about the Principality of Bulgaria, its history, stamps and postal history are strongly advised to get hold of a copy of Roberto Sciaky’s 120-page book entitled Bulgaria: from the Ottoman Empire to the Kingdom: History, Stamps and Postal History, 1840-1908. The late Roberto Sciaky takes us on a fascinating tour of Bulgaria’s history and philately without going too much into specific details. (Personally I feel he could have given us some details on how to identify the forgeries mentioned above; that would have been most helpful). There are of course numerous illustrations of stamps and covers and a number of appendices giving information about postmarks and the like. The book was published last year by Vaccari in Italy and can be obtained from many dealers who specialize in philatelic literature. For more information go to Vaccari’s home page at www.vaccari.it

Now that Bulgaria has joined the European Union I believe it is time to discover that the country has a lot to offer us collectors. In this article I have stressed the Principality period which in my view is the most interesting one. However, Bulgaria is such a rich philatelic area that there should be something to whet the appetite of most collectors.

[Published by kind permission of the Editor of Stamp News Australasia.]